I recently read a couple of blog posts that inspired this one. One was written by my friend Josh Mosey chronicling our writer’s group formation, the other was a post about a 25 year journey in the writing life by Roger Colby.

Every writer has those moments in life. Moments that define us, motivate us, or destroy us as artists. Here are some of mine.

I am sure it started before this memory, but one of the moments I come back to again and again for encouragement is a conversation I had with an English professor named Dr. Fabisch. Many of you reading this might have attended Cornerstone University and had a class or two of hers. The reason I remember this conversation is because I had no interest in writing at this point.

The conversation happened in her office, and it went something like this.

“Mr Evenhouse,” she began peering down her nose and through her glasses in a half-smirk half-scowl, “I wanted to tell you that I think you could write for a living. You write wonderfully,” I stood there, not really knowing what to say, I thought writing was a joke.

“Uh, okay, thank-you” I replied. That was when her tone changed.

“But your grammar is terrible, you need to work on that.”

I don’t remember the details of our conversation after that. These comments stuck with me, not because it was the words I needed to hear as a budding novelist, but because it was such a foreign idea at the time, almost laughable.

Looking back I see I always the idea of writing in the back of my head. This conversation merely opened Pandora’s Box, if you will.

I loved reading as a child. I remember pouring through book after book, then I guess I got bored, or distracted by my other boyhood love, hockey.

I didn’t come back to reading until the summer before my freshman year at college, I discovered Lowry’s books in town. As I walked through its doors and my lungs were filled with that beautiful ‘old book’ smell, I was enraptured by it. I bought many copies of second hand classics: The Tales of Land and Sea by Joseph Conrad, Tom Sawyer, Ivanhoe, and others. I carried them with me to college just so that I could have them on the shelf of my desk. I liked the look and smell of them more than anything. They were like a perfectly aged red wine.

Fast forward to the end of that year in college when I watched The Fellowship of the Ring. It may shock you that I had never heard of Tolkien before this. I know! Through high school and one year of college, I did not once hear of him. After the movie however, I immediately went out and purchased the full set and dove in.

A few years after reading them, I married my beautiful wife Cindy. About six months into our marriage I got an 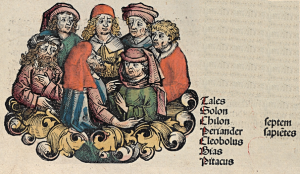 idea for my first novel while poking around interconnected subjects about an idea of the Seven Sages of Greece that were hailed for their wisdom.

From here I went from writing alone to joining a writer’s group as Josh has written in the link at the beginning of this post.

It is always great looking back. Looking back for direction or encouragement. Looking back to see where this all began. Where did your journey begin? What inspired you to write?